For more than half a century, Shelbyville has been home to The Tennessee Walking Horse National Celebration.  This event is held the same time of year every year. Taking place the end of August and ending the Saturday prior to Labor Day each year, The Celebration is a festival of family fun that includes a barn decorating contest, dog show, trade fair and the famous equine competition. We invite our guests to come early so you can walk through the grounds and see how the plain white barns are transformed into “horse hotels.” Afterwards, stop for a bite at one of the many food booths which are operated by local community and civic clubs. And finally, the highlight of the evening, the center ring offers great competition, glamour, and splendor that can only be found in Shelbyville.

The person credited with the idea of the equine celebration is W. Henry Davis. One spring day in 1939, Davis made a trip to Winchester, TN to purchase hay. While there he noticed the Crimson Clover Festival being held on the courthouse square. Heading home that day, Davis thought more and more about the festival and wondered if Shelbyville could host a similar event, and why it couldn’t be a Walking Horse Festival. The next day he approached Shelbyville with the idea, and soon the ball was rolling.

From the beginning the show was placed in the hands of four men: Clyde Tune, Franklin Boyd, P.J. Scudderand William L. Parker. Local civic organizations offered to provide the tickets, programs and food sales. The four founders and the citizens of Bedford County began to recognize the potential magnitude of the event they were hoping to host. In a few months, plans were laid for a horse show that became the model for events all over the South.

The first Tennessee Walking Horse National Celebration was held September 7th, 8th and 9th, of 1939, on the Tate Athletic Field, just north of Shelbyville High School. Ticket sales were in excess of 40,000!

The Tennessee Walking Horse is an all-American breed, born of necessity, family love, and pride. The breed was developed through a century and a half of selective breeding so as to implant stamina, style and spirit, mild manners and an easy-going ride. The breed bears the combined genes of Thoroughbreds from Virginia and England, Morgans from Vermont, American Saddlebreds from Kentucky, and Standard breeds from Ohio and the Midwest. Also included, more distantly, are the Canadian and Narraganset Pacers and Arabians.

The modern Tennessee Walker is a three-gaited horse, either in the show ring or on a pleasurable trail ride. He does the flat-foot walk, the running walk and the canter. Whatever the gait, it is the smooth comfort of the ride that most defines the performance of the walking horse. Other characteristics of the horse include its beauty of conformation, its fine head, nicely shaped ears, intelligent eyes, and trouble-free legs. He is a trail horse and he is a show horse. He is being used to work cattle on western ranches; he is being ridden by mounted patrols in metropolitan cities. He carries bird hunters into fields for shooting from the saddle. He is sure-footed and he is a jumper. He doesn’t panic in crowds or from the weight of a big game hunter’s prize. He is versatile and can be used for any capacity you wish. 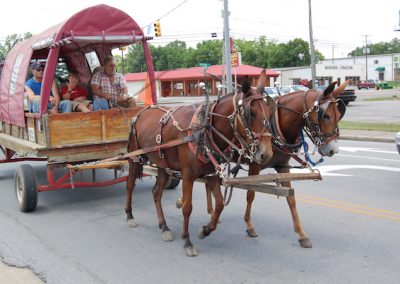 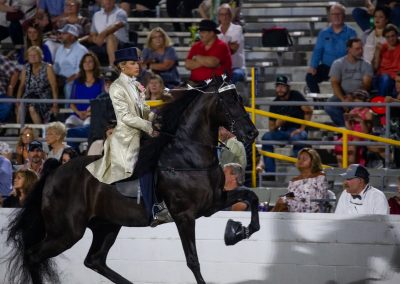